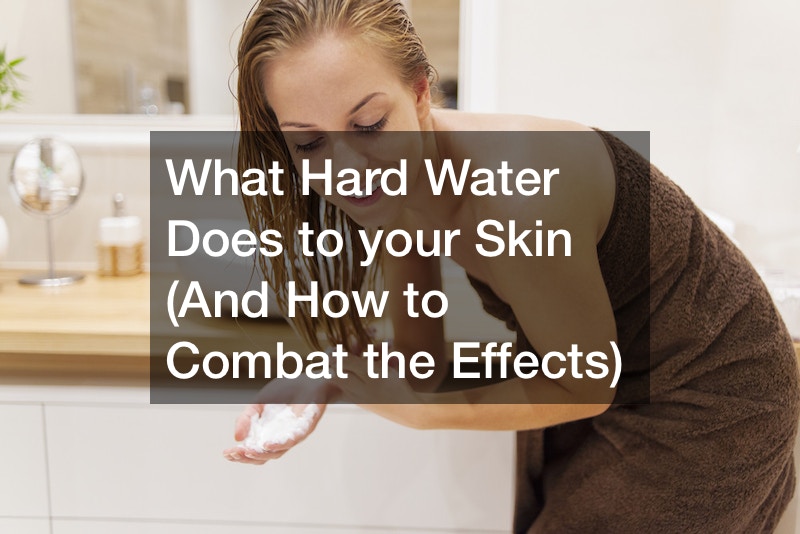 Hard water is water that contains higher levels of dissolved minerals like calcium and magnesium. Soft water, on the other hand, is mostly free of minerals, containing less than 1 grain of hardness per gallon. According to the World Health Organization, hard water can have benefits as a dietary supplement. Water rich in calcium and magnesium can help protect against heart disease and stroke. But while it is suitable for drinking, what hard water does to your skin while bathing is a different matter. In this article, we’ll discuss the effects of hard water and what you can do to mitigate them.

What Hard Water Does to Your Skin Barrier 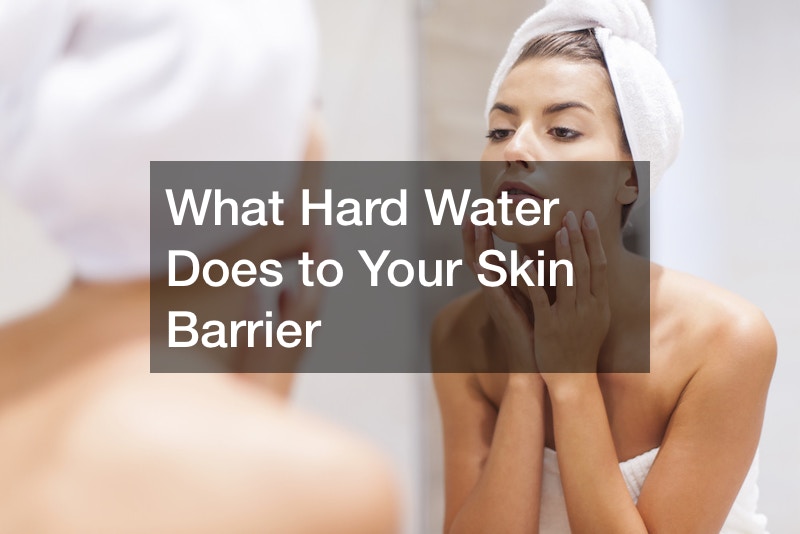 According to research (The effect of water hardness on atopic eczema, skin barrier function) by the University of Sheffield and King’s College London, exposure to hard water damages the skin barrier. The skin has five layers; the top layer called the epidermis, the middle layer called the dermis, and finally, the hypodermis, which is the bottom or fatty layer. The skin barrier, also known as the stratum corneum, is the protective outermost layer of the skin and is one of the five layers of the epidermis. It keeps out pathogens and harmful environmental toxins that would cause chaos in our bodies. While protecting us from environmental stressors, it also holds on to moisture. Without it, our body’s water would evaporate, leaving us dehydrated. Therefore, the skin barrier protects us from:

The researchers found that the high levels of calcium and magnesium ions in hard water bind to surfactants like sodium lauryl sulfate (SLS) and sodium lauryl ether sulfate (SLES), resulting in drying films of precipitate forming onto the skin. SLS and SLES are major components of soaps, shampoos, shower gels, liquid hand washes, washing up liquid, and toothpaste. These compounds, in conjunction with hard water, increase the skin’s sensitivity, and if the skin barrier is damaged, problems such as dry, itchy, sensitive, inflamed, or flaky skin are all the more likely to occur. The hard water and soap mixture can also form an aggregate that clogs the skin’s pores, leading to acne, blackheads, and whiteheads. Even worse, it could lead to conditions such as psoriasis and eczema. If your skin becomes more prone to rashes and infections, this is also a sign of a weakened skin barrier.

The other issue with hard water is its high alkalinity. Our skin’s pH is typically acidic, so an encounter with hard water will raise the skin barrier’s pH level. As a result, the skin’s natural function is disturbed, leaving it vulnerable to pathogens that may cause infection. According to the study’s lead author, Dr. Simon Danby, those suffering from eczema are more sensitive to the effects of hard water than those with healthy skins.

This increased sensitivity is linked to a defective filaggrin gene, a condition found in at least half of all eczema sufferers. Eczema occurs in areas where the skin is weakest, so an eczema medication or skin rejuvenation treatment would focus on these weak areas. The researchers especially noted a positive correlation between atopic eczema in children and those inhabiting a hard water region. According to a study titled, ‘Hard water softening effect of a baby cleanser, ‘there have been similar findings observed among Japanese and Spanish children living in areas of hard water.

In addition to increasing skin sensitivity and disrupting the skin’s pH levels, hard water can also affect the scalp causing dryness and itching. You may also notice your hair begin to lose its color and shine. According to a study titled ‘Scanning electron microscopy of hair treated in hard water’ by the PSG Institute of Medical Sciences and Research, hard water decreases hair thickness and contributes to ruffled hair. Minerals in hard water produce a film atop hair that reduces water penetration into the hair strands. They can also leave a residue on the scalp leading to seborrheic dermatitis, which can cause dandruff. According to Dr. Patrick Angelos, author of ‘The Science and Art of Hair Restoration,’ hair loss can occur when hard water affects the scalp severely. He notes that this is more common in people with eczema or psoriasis. 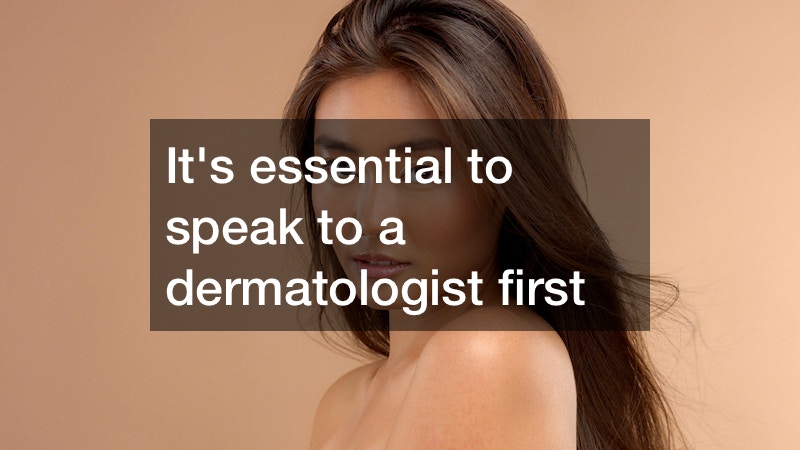 Here’s what one can conclude about hard water’s effect on the skin barrier. According to dermatologist Anjali Mahto, author of The Skincare Bible: Your No-Nonsense Guide to Great Skin, research indicates that hard water damages the skin barrier. However, this is more of a concern for eczema sufferers. For those already tending towards eczema, hard water can be a severe irritant that incites flare-ups.

How to Combat the Effects of Hard Water 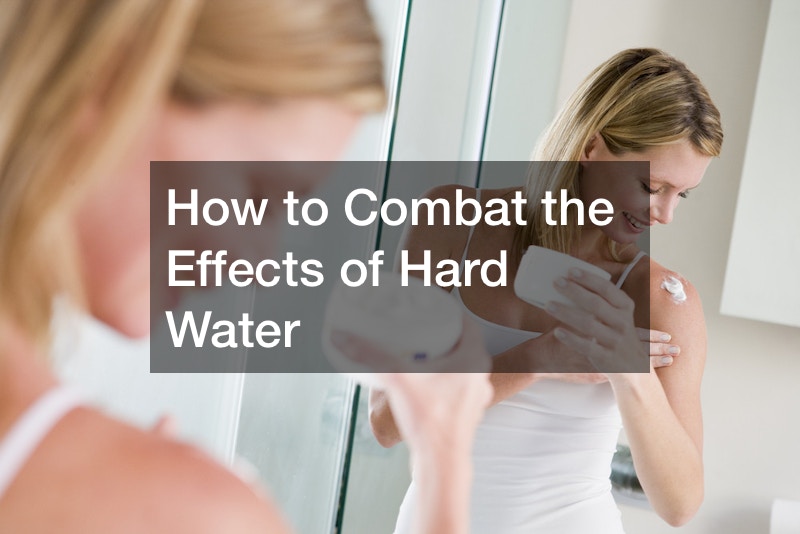 There are several solutions you can try out to alleviate the effects of hard water, some of which you may not have considered, such as chiropractic care. One study published in the National Library of Medicine (Treatment of acute atopic eczema by chiropractic care) showed that chiropractic care could improve eczematous symptoms. Chiropractors say that spinal manipulation can help treat those suffering from acne and reduce symptoms such as pimples and inflammation. Such treatments can reduce what hard water does to your skin. However, a more direct route would be to do away with the hard water entirely.

According to a US Geological Survey study, 85% of US homes have hard water. While lifestyle and daily routine changes can undoubtedly impact what hard water does to your skin, getting a water softening system is the most effective way of addressing the problem. Water softening systems are installed at the main municipal water line coming into the house. They can also be installed for wells. In both cases, the idea is to have all the water entering the house undergo an ion exchange process that softens the water.

In this system, the mineral ions in hard water will be replaced by sodium ions. Water attracts mineral ions as it flows through the soil. A water softening system reverses this process by attracting the same mineral ions out of the water. If you are concerned about increased sodium intake, you needn’t be. In reality, a glass of milk has five times more salt than a glass of softened water. However, the amount of sodium in your water will vary depending on how hard the water was in the first place. For example, a water well may have higher amounts of minerals than tap water, according to M.D. Sheldon G. Sheps of the Mayo Health Clinic, an 8-ounce glass (with approx. 7 grains of hardness) of softened water contains less than 12.5 milligrams of sodium. The 2020-2025 Dietary Guidelines for Americans recommends a daily sodium consumption of fewer than 2,300 milligrams (mg).

If you do decide to get a water softening system, ask your soft water expert to first inform you of how much sodium will be in your system. According to the Drinking Water Inspectorate (DWI), it is safe to drink water with a sodium content of up to 200 ppm. If your well pumps are bringing in very hard water or you don’t like the taste of your water, a reverse osmosis water treatment system can work alongside your water softener system. The reverse osmosis system will remove 95% of all common additives in the water, and that includes sodium. With soft water, you can expect more lather, no residue on the skin, less harshness on the skin, and rejuvenated skin. 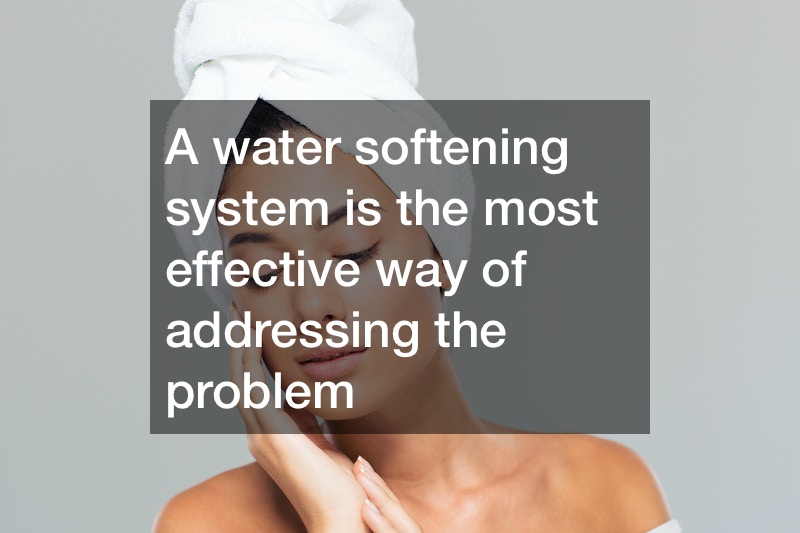 Do not use very hot water on your face, as this can leave your skin dry and irritated, exacerbating the effects of hard water. Cold water doesn’t do an excellent job of removing excess oils from the skin though it does reduce puffiness. According to the American Academy of Dermatology (AAD), you should use warm water on your face. It will make your face plumper which reduces the appearance of your pores. Wash your face twice a day in the morning and night. Over-washing won’t help with hard water damage restoration and will instead have the opposite effect of drying the skin and causing irritation. Try also keeping the bathing time to a minimum.

Use cleansers and body washes that will help maintain your skin health; these include moisturizers and un-fragranced emollient washes. Generally, products that are free of dyes and perfumes are healthier for the skin. Look for moisturizing body oils and soap-free cleansers that can help restore the body’s moisture levels to reduce what hard water does to your skin. Moisturizers with ceramides and humectants will help ease the effects of hard water. Ceramides help keep water in while humectants act like a water service, pulling water to the epidermis from the dermis, therefore keeping the skin’s outer layer hydrated.

There are also skincare ranges that specifically work to counteract hard water’s effects by including a chelator. A chelator is the only ingredient known to remove calcium from the skin. Look for the ingredient EDTA’, or Ethylene Diamine Tetra Acetate. You can even add that ingredient to your moisturizers, creams, cleansers, and serums. According to the AAD, people with eczema should search for products with the NEA Seal of Acceptance. The seal guarantees that a particular product is free of ingredients unsuitable for sensitive skin or eczema. Speak to a hospital dermatologist about what hard water does to your skin and the products that can help you.

Everything that goes onto your face needs to be gentle and rejuvenating. Do not rub the towel onto your face when you are done bathing. Instead, pat it dry. If you need to have makeup on, why not forego them on some days unless you are sure they won’t hurt your skin? When exfoliating, do so with soft and light movements and limit exfoliation sessions to every three days or so. Don’t overuse active ingredients like AHAs (e.g., glycolic or lactic acid) or BHAs (e.g., salicylic acid) as they can cause over-exfoliation, which can lead to skin sensitivity and irritation. Consider also changing your current pillowcases for a smooth fabric like silk. The smooth texture of silk won’t be abrasive on your face, which can help reduce what hard water does to your skin.

Use sulfate-free shampoos and conditioners to avoid drying out your scalp. Such substances will also leave your hair looking dry and lifeless. Not to mention that if you do have a septic tank, cleansing products that contain sulfates and phosphates will kill off the good bacteria in the tank. This may lead to earlier than normal septic pumping.

According to Bob Villa, the average water softener system will cost $1,500. At that price, alternatives like water softener shower heads look mighty appealing as they can be had for less than $100. While they won’t actually soften the water, they will improve your shower water’s quality by removing heavy metals, chlorine, and other impurities that may irritate the skin and hair. Alternatively, you can choose to cleanse the face or scalp separately with bottled water.

When considering whether to get a water softener system, don’t just think of what hard water does to your skin. Hard water stains clothes and causes laundry to fade. It also causes scale buildup in your home’s plumbing system and fixtures like taps and showerheads. This scale can eventually damage your plumbing. Scale buildup in hot water piping can cause water to have to push harder to get through, and that can cause higher utility bills.

As for what hard water does to your skin, it’s essential to speak to a dermatologist first before making a choice. They can provide prescription products that go hand in hand with water softening systems. 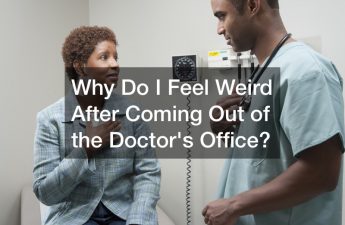 Why Do I Feel Weird After Coming Out of the Doctors Office? 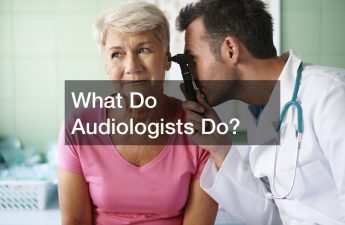 What Does an Audiologist Do? 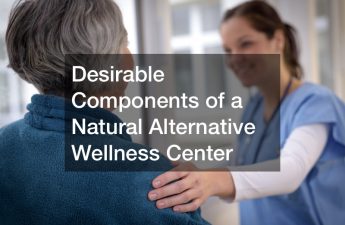